This article is for the 2019 remastered edition. For past releases, see Langrisser I and Langrisser II. 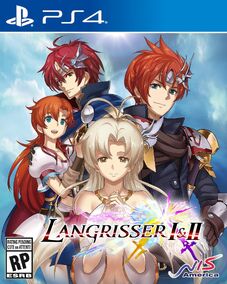 Langrisser I & II is a fantasy tactical role-playing game, developed by Chara-Ani and published by Kadokawa Games, Ltd. It is a collection featuring the remastered editions of Langrisser I & Langrisser II. It was first released in Japan on April 18, 2019 for the PlayStation 4 and Nintendo Switch, and the collection will be published by NIS America in North America on March 10, 2020 and in Europe on March 13, 2020. It will be available for download on Steam in 2020.

The game features remastered art, graphics, and music. The player is able to switch between the classic and remastered art styles within the system menu. Additionally, they can switch between classic renditions of the music ranging from 1993-1998 with downloadable content. The original music from the original two Langrisser releases and the modern remastered music is available by default. 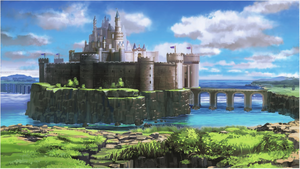 Baldea Castle, before the events of Langrisser I

On the continent of El Sallia, an ancient war between darkness and light has waged since time immemorial. Lucilis, the Goddess of Light and the protector of humans, and Chaos, God of Darkness and ruler of demons, have brought the realm into a never-ending cycle of strife. As one side cannot exist without the other, conflict is bound to envelop the land once more until the foretold heroes, the Descendants of Light, appear with Langrisser in hand to restore an era of lasting peace.

As the storylines of Langrisser I and Langrisser II are set centuries apart, the nations, characters, and locations involved change between titles.

Langrisser I features the following locations:

Rayguard: A formidable empire lead by the mercenary-turned-ruler, Kaiser Bernhardt. Recent aggression and forceful annexations have put the surrounding nations on edge. Its military is divided into four branches:

Kalxath: A kingdom renowned for its military prowess. The leader among the rebel nations opposing the Rayguard Empire. It is the home of Princess Cherie.

Salrath: A small dukedom opposed to the Rayguad Empire. Led by Duke Loren, father of Scott. It is the home of Hein and Liana.

Estol: The location of the Temple of Light, known for its warrior monks.

Reitel: The Holy Land protected by ancient guardians. It is the location of the temple which houses the Dark Rod, hidden in the woods atop the mountains.

Baldea: A fallen kingdom whose sunken remains house the Sacred Sword Langrisser. It is the home of Elwin and Doren.

Velzeria: A ruined, lost kingdom known to humans as the Forbidden Land. It is the home of demonkind. 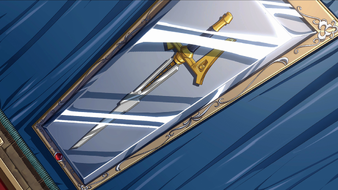 In generations past, a senseless war for power devastated the continent of El Sallia. Word had spread of an ancient blade so fearsome that its wielder could conquer any nation. Thus, those who desired such boundless power flocked to the battlefield, engaging in ceaseless bloodshed to lay claim to the legendary sword, Langrisser. Yet those who sought to protect the blade persevered through the vicious onslaught. Vowing to safeguard it from those who may abuse its immense power, the royal family of Baldea hid Langrisser deep within the defenses of their castle.

With peace restored, the centuries passed and the blade was nearly forgotten…

Until Kaiser Digos, ruler of the Dalsis Empire, descended upon Baldea Castle with the very intention of making Langrisser his own. With the castle under siege, King Illzach urges his son, Prince Ledin, to seek reinforcements from the Dukedom of Salrath. Ledin and Volkoff, a veteran knight of Baldea, escape to Salrath, fighting off bandits along the way. However, upon arriving in Salrath, Ledin learns of his father’s demise at the hands of Kaiser Digos. Now, Ledin, along with his companions, must stand against the Dalsis Empire in order to take back Baldea Castle and uncover the secrets of Langrisser.

Two hundred years have passed since the War of the Sacred Sword, and the legends of Langrisser and the Descendants of Light have faded into obscurity. However, this hard-fought era of peace is waning as Kaiser Bernhardt, founder and ruler of the formidable Rayguard Empire, seeks to extend his influence to the entirety of El Sallia, using any means necessary. Tensions among the surrounding nations continue to rise as the Kingdom of Kalxath and its allies oppose annexation to Rayguard.

As the continuous threat from the empire becomes dire, a wandering swordsman named Elwin travels the continent with Hein, a young mage-in-training he has befriended on his journeys. The two are taking respite at the inn of Hein’s hometown, a peaceful village in Salrath, when General Leon and the Rayguard Empire’s Blue Dragon Knights arrive. Leon and his forces have come to apprehend Liana, Hein’s childhood friend and Priestess of Light, but his motives are unknown. Fearing the empire’s intentions, Elwin and Hein hurry to intervene, setting into motion a new battle between darkness and light.

Langrisser I & II is a tactical role-playing game that features turn-based strategy, an array of playable commander units, mercenary squads, and numerous branching storylines. Battles take place on a grid pattern map, similar to chess, where the player takes turns against an enemy army, moving each individual unit and using various tactics to attack or defend against the opposing forces. Langrisser I and Langrisser II are both divided into chapters, with each chapter featuring a scenario where the storyline will progress and a new battle will begin. With each new battle map, the player will select their commanders, hire mercenaries, and engage with enemy forces, meeting the specified win conditions in order to claim victory. Though the maps and commanders vary between titles, the game mechanics are shared, thus any tactics and strategies learned will aid the player as they progress through the chapters of both entries.

By utilizing the Story Tree, the player can gain additional gold and EXP, as well as explore different story routes. Should the player wish to revisit past stages, their stats and gold will carry over. However, once the Story Tree is reset to a particular chapter, it is not possible to skip to future chapters. For example, if the player resets to chapter 9 from chapter 12, the only way to return to chapter 12 is to progress through the story linearly.