Guilds: What are Guilds?[edit | edit source]

Guilds are found on the bottom hotbar next to Bonds.

Guilds are a gathering place for players to form ingame communities. Activities provided by being a member of a guild include guild specific chat, Guild Wars(PVE), and a guild store. Joining a guild is one of the fastest ways to obtain rare class advancement materials and is an extremely valuable source of player cooperation. Join one as soon as you can at level 25!

Joining a guild is free and easy! Once you reach Team Level 25 the icon on the bottom of the main game screen will unlock.

When you open the guild menu by selecting it on the bottom hotbar you are shown the Guild of Time screen. This screen lists all guilds on your specific server. Be aware that guilds are unique to the server you are currently logged into, so if you want to join another server you will have to find a new guild to join on the new server. You can be in multiple guilds on multiple servers.

To join a guild simply select it and press "Apply." Some guilds are open to the public and other guilds require the Leader/Vice Leader to approve entry.

You can find more guilds by pressing "Another Batch" button on the bottom center. If you choose you may also purchase a Guild License from the Store and create your own guild for $1.00 USD.

On the Guild list Screen the information about each Guild is listed left to right.

The left side of the screen lists the current Guild Leader, their level and avatar, as well as the recruitment message. This message is set by the Leader/Vice leader and is a general welcome message to anyone who would join the guild. If the guild operates on approval of applications this message might have specific instructions on how to join. It also might give you an idea of what the guild's goals are in short or long term. 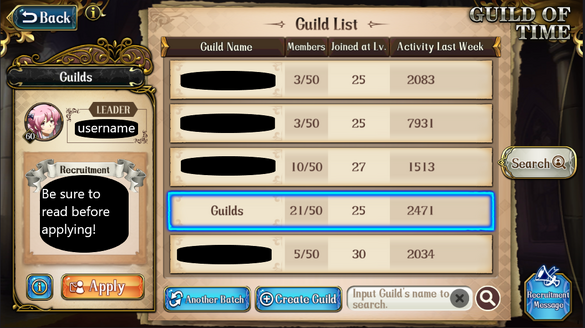 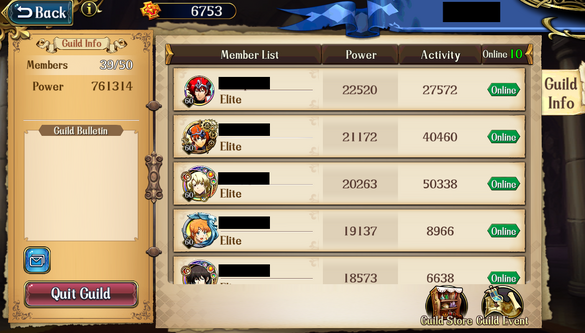 The Guild Screen becomes available once you have officially joined a guild or have created your own. Now whenever you press the "Guilds" button on the main screen you will be taken here instead of to the Guild List. This screen lists all the details about your current guild and its members. Your current Guild Medals are listed next to the "Back" button. This button takes you back to the Main Screen.

This lists the current and maximum member of the guild, the total power of the top five players, and the current guild bulletin. This is also where the Quit Guild button is.

"Power" is the combined number of the top 5 players.

Each member is listed by their name, avatar, and team level. They also have a title underneath their name. There are several titles a member can have and can be changed by the leader/vice leader or automatically by the system.

Power shows the members Total Hero Power as shown on the Profile page.

Activity displays how much Stamina the member has spent anywhere in the game since joining the guild. This resets if you leave the guild and either rejoin or join another guild.

Online shows how many members are currently online and if the current member is online or offline.

The guild store is where you spend your Guild Medals on various hero Class Materials, Equipment Runes, Gold, and even Runestones! This is why people join guilds and is an invaluable resource in advancing yourself and your heroes. Not having access to this screen heavily handicaps your game account as a whole as the highest Class Materials and Equipment Runes are locked away behind endgame content. The Guild Store allows you to buy them with a simple click of a button and far sooner than you would be able to normally. 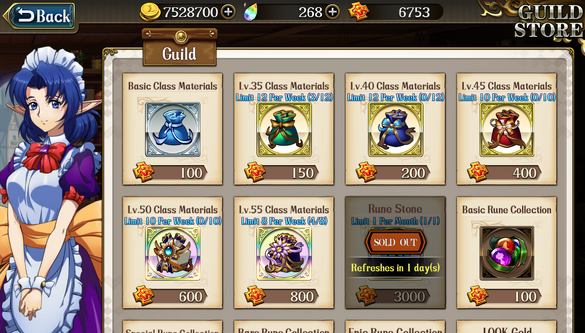 Basic Class Materials and Rune Collections can be bought as many times as you want. All other Class Materials have a limit on how many you can buy in a 7 day period. The amount you can buy is listed above each image in (0/12) format. The limit is not the same for each item and Runestones are limited to one per month. Please note that this week resets with the rest of the game on Sunday. Runestones are a monthly cooldown.

Once you select an item to buy it will open up a smaller window to allow the choice of which item you want. Which color for Equipment Runes and which type of Class Material.

Upon selecting the "Guild Events" button you are only given one option: Guild War. This is where players from the guild and only from the guild come together to complete extra hard maps and earn Guild Medals and other prizes.These maps can vary in difficulty drastically so be prepared to team up or battle bitterly alone against hordes of AI opponents on large maps. This is the only place to earn Guild Medals so get into the fight!

Each guild is allowed two Guild Wars each week, win or lose. The current chances left are listed on the bottom right. 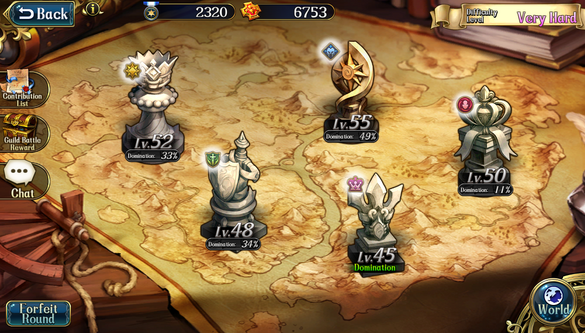 This map is where you can see progress on the current Guild War, see contribution scores, and select a chess piece to start a battle map.

The top of the screen has the "Back" button to take you to the previous Guild Event Screen. It also lists both your Personal Guild Battle Points and your current Guild Medals.

Personal Guild Battle Points are the points you earn by participating in Guild Battles and are visible to all other members of the guild.

On the left side of the screen are four buttons.

Contribution List shows all guild members and how many Personal Guild Battle Points they each have in a ranked list.

Chat opens the ingame chat system the same as the main screen.

Forfeit Round stops the current Guild War losing all progress and is only available to the Guild Leader/Vice Leaders.

The World button takes you immediately to the main game screen. 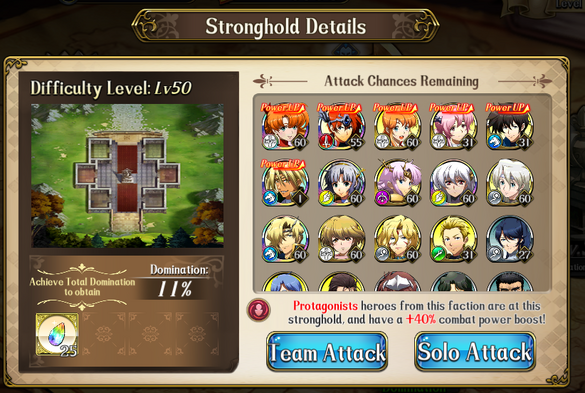 This screen shows everything you need to know about a particular Stronghold.

On the left is the difficulty level, a preview of the battle map, and the reward for reaching 100% domination of the Stronghold.

The "Attack Chances Remaining" box lists all your current heroes currently available to join in the battle. The "Power Up" icon above the hero portrait identifies the heroes in this Stronghold's advantaged Faction. This faction is listed on the bottom of the box and all heroes get a 40% damage boost for this Stronghold. Please be aware that each hero can only participate in one guild battle each day, win or lose.

The two buttons on the bottom of this screen are used for creating a party or going Solo. Each battle map allows for up to six heroes. If you are solo you must use six of your own heroes, if there are two plays each deploys three, and if there are three players each deploys two.Thus teaming up allows you to save more heroes for more guild battles each day.

Each battle contributes a percentage towards the Domination of the Stronghold. Both wins and losses earn you points and percentage, though defeats earn drastically less. Once a Stronghold has been dominated it can no longer be selected. 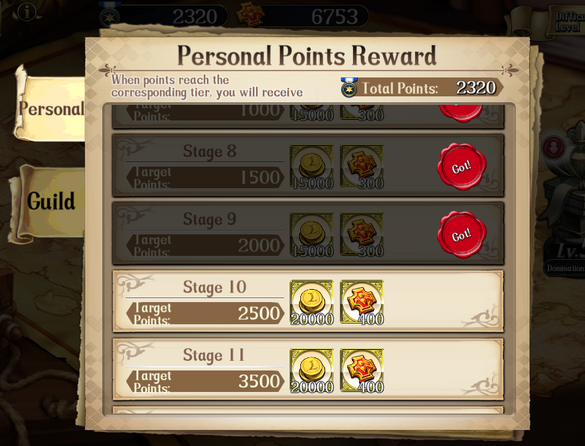 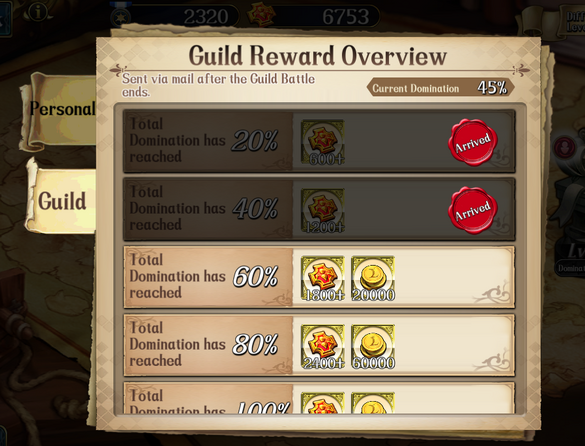 Guild Battle rewards are separated into two categories: Personal Points Reward and Guild Reward. Rewards for Guild War are sent to the players personal mailbox after each Guild War completes.

Personal Points Reward is unique to you as a player and can only be obtained by your involvement in Strongholds. You will earn points win or lose, so long as at least one unit is defeated from the map. The amount you earn is dictated by several factors: what level the Stronghold is, how many enemies you killed in the battle, and if you completed with victory. The rewards and points required are divided into phases.You can see which phase you are currently on and what rewards are yet to be obtained. All rewards are given in both gold and Guild Medals. These rewards are are dynamic and change with difficulty level. (Please note that "Phase" changes to "Stage" halfway through the list. It appears to be a developer mistake). Below is an example of rewards.

Guild Reward Overview lists the current Total Domination reached by the entire guild working together. These rewards change according to the difficulty of the Guild War map. The guild must reach 100% domination of a Stronghold to unlock each level of rewards. There are five strongholds on each Guild War map and each provides 20% Total Domination score. Rewards are listed below in the format Guild Medals/Gold. 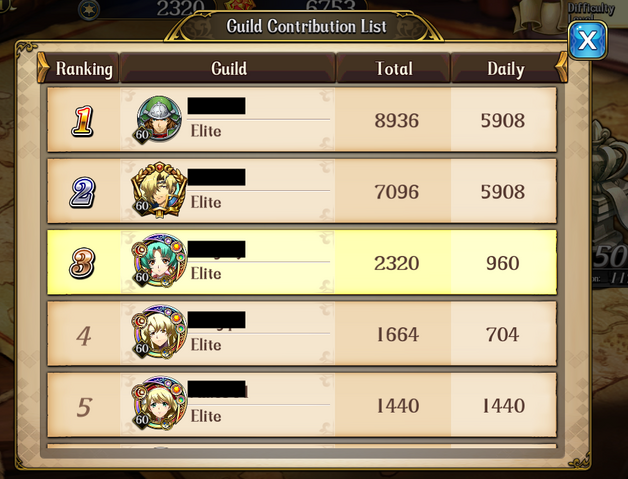 The amount of Personal Guild Battle Points earned by all players is made available to view by the Contribution List window.

This window lists all players currently in the guild and ranks them according to how many Personal Guild Battle Points they have for the ongoing Guild War. It lists each player, their title, their total points earned, and the points earned today.

Tip: Some guilds require you to reach a level of points per Guild War, make sure you're up for this before joining!